John E. Elliott, Gencor’s CEO, stated, “Gencor had another solid quarter with revenues up 20%, gross margins of 28%, net margins of 11% and a significant increase in our backlog.

Backlog of $37.9 million entering the fourth quarter increased 77% year to year as we closed a number of opportunities after the ConExpo show. Deliveries of equipment are scheduled for the fall and early winter months. This is atypical, as customers historically require delivery of equipment between late winter and spring.

Current quoting activity for fiscal 2018 is encouraging as it is higher than this time last year. We see solid opportunities across all regions of the US and improving activity in Canada.

Steel prices remained stable in the third quarter and we have not seen signs of higher prices in the fourth quarter. We have increased headcount, focusing on expanding our product offerings, improving our cycle times and addressing increased market demand. We will be making additional investments in technology to expand and improve our production capabilities.” 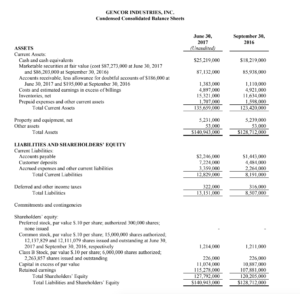