John E. Elliott, Gencor’s CEO, commented, “We are pleased with the company’s continued strong performance.  We have been expanding our manufacturing production to meet the increasing demand for our equipment, without sacrificing operating income.

Second quarter net revenues of $22.5 million do not include $4.1 million of revenues that will be recognized in the third quarter.  These revenues include product that was finished but not shipped until April and contracts that did not reach the required percentage of completion level to be recognized in the quarter.

Despite higher steel prices, gross margins significantly improved to 29.6% from 24.6%.  The 500 basis point increase is attributable to a more efficient operation and full absorption of overhead.  Operating margins of 18.0% are the highest quarterly margins in the Company’s history.  Gencor is benefiting from a dedicated and well-trained workforce, producing equipment that has a reputation for superior quality.

The March ConExpo-Con/Agg show was a tremendous success, generating strong leads some of which have closed and others we expect to close.  Backlog of $42.9 million increased 35% year to year and is at the same level we otherwise started the fiscal year.  Historically, backlog declines in our second and third quarters as orders are usually filled and new orders are not received until the fall and early winter months.

The Company will continue to increase production and efficiency at both of its facilities and augment its workforce over the next few quarters by investing in technology which will enhance production in a number of areas.” 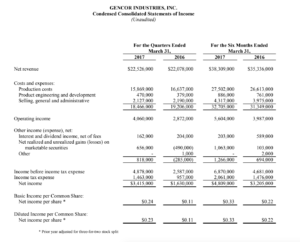 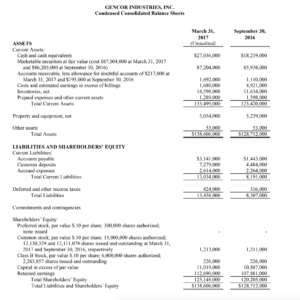