John Elliott, Gencor’s CEO, commented, “First quarter revenues of $23.1 million represent the best start to our fiscal year in over twenty years. We have a positive outlook which is supported by favorable market conditions and the recently enacted U.S. tax law legislation: Tax Cuts and Jobs Act.  The Fixing America’s Surface Transportation Act (FAST Act) and plans to increase domestic infrastructure spending at the Federal level have resulted in an increase in asphalt plant orders and quoting activity. We also anticipate being a beneficiary of lower corporate tax rates and the accelerated tax deduction on capital purchases as a domestic manufacturer and purchaser of capital equipment.

We are pleased with our 46% sales increase in the first quarter, which is traditionally our lowest revenue quarter. Our customers continue to place large orders as domestic highway construction spending remains strong. Net income in the quarter was enhanced by the changes to U.S. tax legislation, specifically a reduction in corporate tax rates on deferred tax liabilities and acceleration of tax depreciation on capital expenditures.

In the first quarter gross margins declined as the company increased its manufacturing overhead to support the significantly higher production, as revenues have doubled over the past two years.  The company also accelerated its capital purchases in the first quarter to maximize the tax benefit due to anticipated lower future tax rates. Gencor will continue to invest in its operations to improve efficiencies and meet the strong demand for its products.

Backlog of $50.2 million is 23% higher than the prior year and represents continued optimism from highway contractors that the Federal government and many states are once again focused on investing in America’s infrastructure. We look forward to growth and continue to evaluate opportunities to expand our existing businesses.

In March we will be exhibiting at the 2018 World of Asphalt show where we anticipate significant interest in our products.” 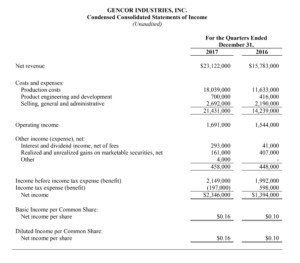 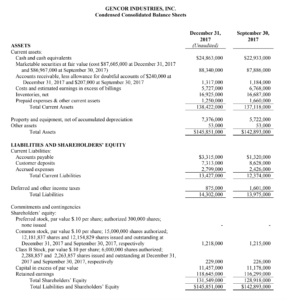