John Elliott, Gencor’s CEO, commented, “Gencor began fiscal 2017 with the largest backlog of asphalt plants and components in the company’s history.  Many of our clients placed orders earlier in anticipation of 2017 construction work and beyond which has resulted in an increase in demand for our products.  Federal funds from the FAST ACT are being dispersed to state departments of transportation and should result in an increase in bidding activity for our domestic customers.

First quarter revenues represent solid growth from the previous year and a 151% increase from two years ago.  Revenues in our first quarter are often significantly lower than our second and third quarters as customers typically do not take delivery of equipment until late winter and spring.

In the first quarter Gencor delivered improved gross margins of 26.3% and managed operational expenses, which resulted in a 140 basis point increase in operating margins to 9.8%.

In January we implemented second shifts at both of our manufacturing facilities and are exploring avenues to significantly expand our production capabilities to meet the anticipated future demand for our products.  Potentially favorable new legislation could have a positive impact on Gencor’s performance in the future.  These include a proposed $1 trillion investment in domestic infrastructure, an immediate 100% tax deduction on all capital equipment purchases, and a proposed reduction in the corporate tax rate.

In March we will be exhibiting at the 2017 Conexpo-Con/Agg construction equipment show in Las Vegas where we anticipate significant interest in our products.” 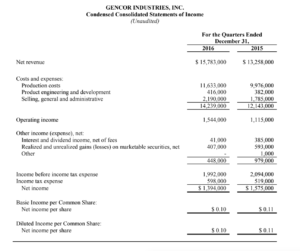 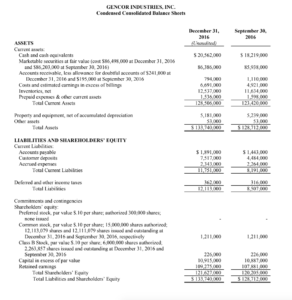